Saturday, October 3 8 pm Amanda Dawn Christie Dividing Road Maps by Time Zones: Ten Years of Moving Pictures, 1999-2009 Toronto-based filmmaker Amanda Dawn Christie presents a program of films reflecting a decade of her restless growth as an artist. Working in both 16mm and super 8 film, she moves between techniques such as hand processing and optical printing to layer images and explore experiences and memories of her past. Filmmaker in attendance, Projected in 16mm, Super 8 and Video. $5 Suggested donation

Saturday October 17 2 – 6 pm 13th Annual International Home Movie Day Films can be dropped off for inspection beginning at noon Home Movie Day is a worldwide celebration of home movies and amateur films, and provides an opportunity for communities to see and share home movies while learning how best to care for them. Bring your own home movies into VSW, and trained film-handlers will inspect all films and project them before a live audience. We can screen most film or video formats, including Super-8mm, Standard or Regular 8mm, 16mm, VHS tape, DVD, and Quicktime compatible digital files. Films can be dropped off from noon to 2 p.m., with screenings continuously happening from 2 pm to 6 pm in the VSW Auditorium. Free and open to the public

Saturday November 7 8 pm Who is Bozo Texino? by Bill Daniel Visiting artist Bill Daniel presents his 2005 independent documentary, Who is Bozo Texino?, a chronicle of his search for a mythic rail graffiti artist. The project is the result of a 20-year study of “monikers,” and is fabricated from hours of 16mm and super 8 film, most of it shot on freight trips across the western US. Who is Bozo Texino? is a film on the 100-year-old tradition of hobo and rail worker graffiti, and includes interviews with some of the railroad’s greatest graffiti legends. Filmmaker in attendance, Suggested donation $5 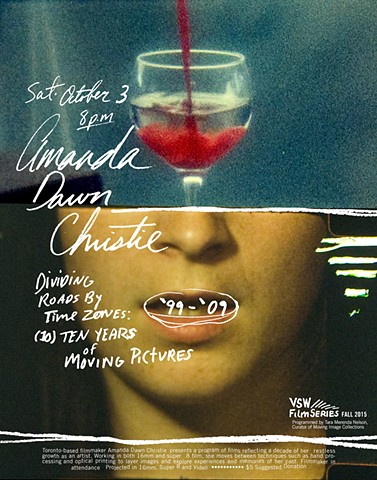